Customer: Management company
Object: hot water pipes of multi-apartment building, Moscow, (metro Kropotkinskaya)
Installed: WS-62 (DN50) x 1 pc.
Source of water: Municipal water supply.
Chemicals: No.
Period: from 06/26/2018 to 08/10/2018 (1.5 months).
Description: This house does not have its own heat-point. Hot water comes directly from the city. (municipal hot water) Previously, old type electromagnetic water softener, with coils made from the wires was installed on a main hot water pipeline to the house. It was constantly on, but nonetheless, scum formed in the pipes. This device was dismantled before installing the WS-62 ferrite water conditioner.
Purpose: Removing the existing scale, slowing the formation of a new one.
Result: After 3-4 weeks of operation, the accumulated deposits in the hot ware pipe began to soften and then gradually started to wash out. Tenants reported, next two weeks some turbidity appears in the water. Mostly in the morning time. Than the water become transparent again.
Comment: it is a typical situation. In the night time water circulation is working too, but people do not use water. So the water flow washes some portions of the deposits, but they can’t leave the system. The tenants, who open the tap first, in fact make the partial cleaning of the system through their taps.
Suppose the management company can organize additional flushing of the system to prevents such moments.
The good point is that this cleaning last 2-3 weeks only. And it is cheaper and more safety, as for the tenants, as for pipes, that to make a chemical cleaning of the pipes in the house. 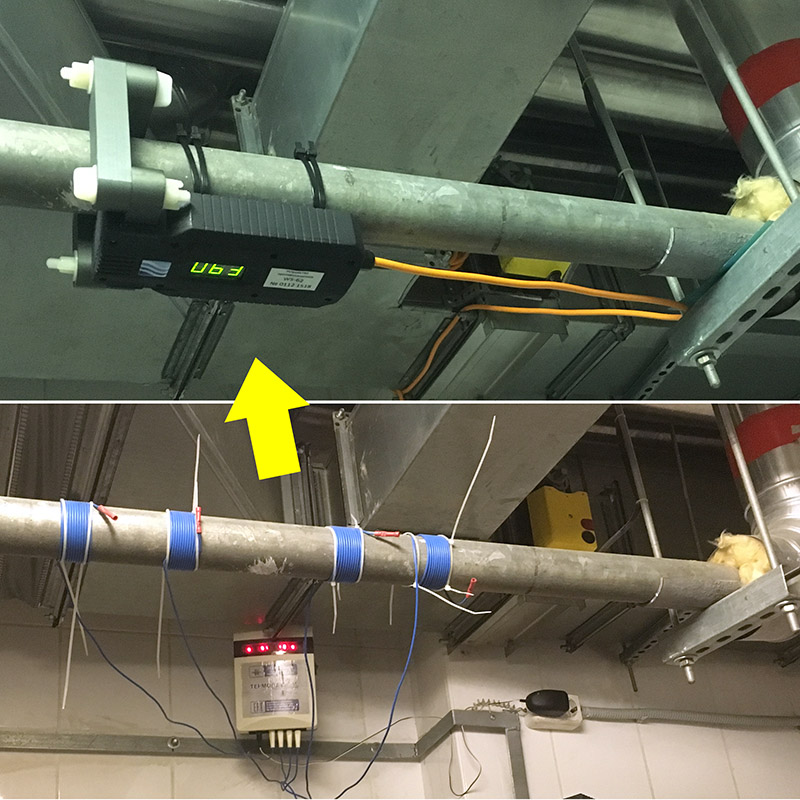 Modern anti-scale devices, ferrite type, are more complicate in manufacturing. Accordingly, they are more expensive. They can cost in 3-4 times higher than old type electromagnetic water softeners, or “hardness converters”, “scale converters”, or simply, descaling devices. However, each penny, invested by the customer in a new generation device works 25-30 times more efficiently.

Management companies, interested in lowering of operating costs, estimated the difference in a result. They began to replace obsolete devices with modern, efficient ones.
Ferrite anti-scale devices transmit electromagnetic field energy to a pipe with water using a ring made of a special ferroalloy. This allows to minimize losses during the transfer of energy to water. The losses are 2-3% only.

For comparison, previous generation electronic water softeners (with induction windings from a wire wounds around a pipe), loose more than 99% of energy during transmission into the water (i.e., less than 1% gets into the water). This explains expert’s opinions about expediency of using them.